NASA’s InSight lander on Mars has felt its first marsquakes

Mars is shaking. NASA’s InSight lander has detected its first marsquake, a rumbling from the planet’s interior, and it may have felt three more. These quakes could help us learn how much water is hiding deep within the planet.

InSight landed on Mars in November 2018, and in December it placed a seismometer on the surface to monitor for quakes. On 6 April, it felt the ground shake for the first time.

Marsquakes could eventually teach us about the Red Planet’s deep interior, including what its mantle, crust, and core are made of and the thickness of each layer. The seismometer is as sensitive as the best instruments we use on Earth and can detect shifts in the ground of less than the thickness of an atom.

The 6 April quake was very small, so it didn’t provide much insight into the Martian interior. “In the best station on the Earth, a station which is in a seismic vault deep down, you might be able to detect this quake,” says Philippe Lognonné at Paris Diderot University, a member of the InSight team. 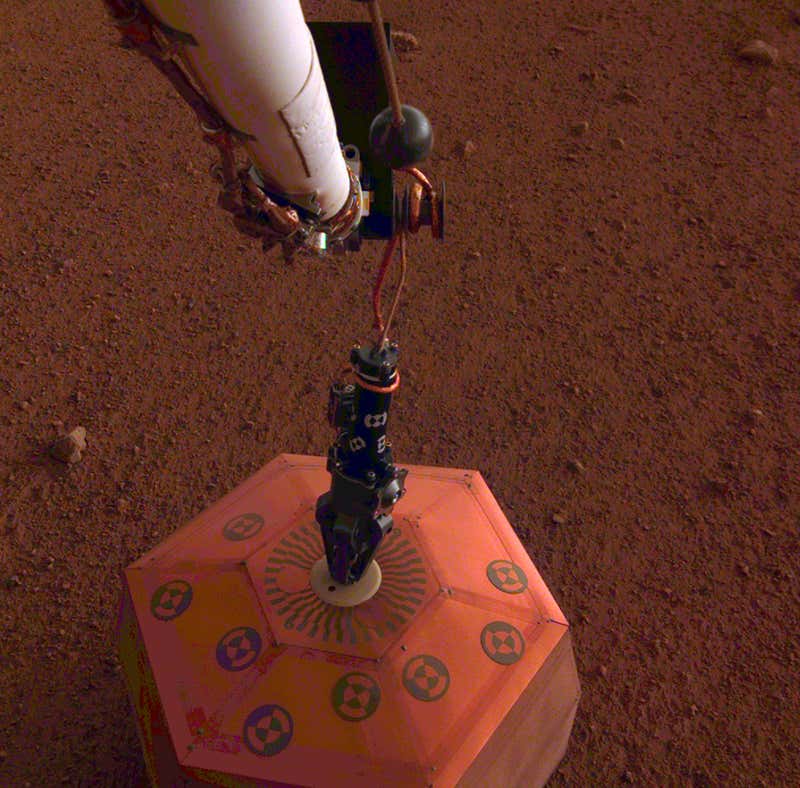 The measurement gave us some basic information about how marsquakes compare to earthquakes. “The first surprise we got with the marsquake is that it had more similarity to a moonquake than to an earthquake,” says Lognonné. “On Earth the duration of the signal is a few minutes, on the moon it’s closer to an hour, and on Mars it’s around ten minutes.”

That’s because the rocks on Earth are full of water, which absorbs the shock of seismic activity better than dry ground, shortening the signal. The first marsquake we’ve detected indicates that the shallow subsurface of Mars does not have much water – far less than Earth – but is not quite as dry as the moon.

InSight also detected three even smaller seismic signals in March and April, so weak that even the best detector on Earth would never have been able to spot them. One of these signals may be from wind jostling the seismometer above ground, but the other two seem to be either from marsquakes or from the ground shaking slightly as meteorites hit the surface, Lognonné says.