The number of people who fear artificial intelligence is on the rise.

A new poll of 1,004 registered voters in the U.S. found that 57 percent of them believe AI is a 'threat to the human race.'

The findings demonstrate the increasing skepticism around AI, which has made its way into many of the devices we use today, from cars to cellphones.

The survey was conducted from April 17th to 18th by political analyst and pollster Scott Rasmussen and market research firm HarrisX.

In addition to the 57 percent who believe AI is a threat, approximately 43 percent disagree and believe it's not something to be worried about.

Of the 57 percent who consider it a threat, some 16 percent of them doubled down even further and indicated they believe it's a 'very serious threat.'

Rasmussen noted that the number of respondents who consider AI a threat has risen three percentage points since November.

'Younger voters are a bit more concerned about A.I. than voters over 50,' Rasmussen claims.

'Republicans are a bit more concerned than Democrats and Independent voters.'

The study also showed that voters are unsure about the effects of AI on the economy, with 47 percent of respondents indicating they didn't know if its impact would be good or bad. 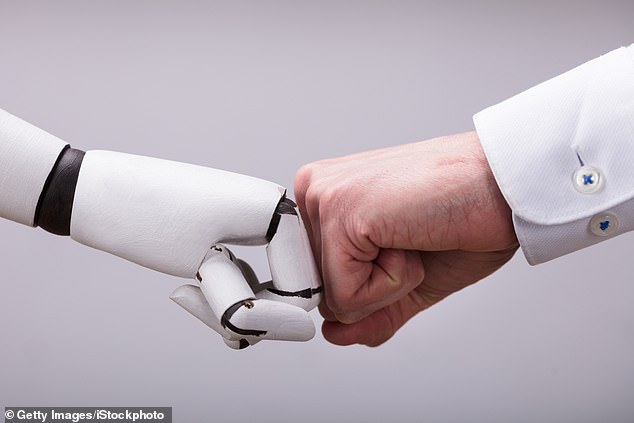 Of the 57 percent who consider AI a threat to humanity, some 16 percent of them doubled down even further and indicated they believe it's a 'very serious threat,' Rasmussen found

The results come as Americans remain fearful of what roles AI will take on in the home and the workplace.

A 2017 Pew Research study revealed that 70 percent of Americans are unsure or have concerns about the rise of robots and AI.

Tech giants have repeatedly highlighted the potential for these technologies to make our lives easier and improve efficiency among corporations, among other benefits.

But that optimism doesn't appear to have trickled down to average Americans.

'Ordinary Americans are very wary and concerned about the growing trend in automation and place a lot of value in human decision-making,' Aaron Smith, who led the survey of over 4,000 adult Americans.

'They are not incredibly excited about machines taking over those responsibilities.'

Not everyone in Silicon Valley is especially welcoming toward AI's advancements.

Billionaire tech mogul Elon Musk has emerged as one of AI's most vocal critics, repeatedly warning that AI could hurt humans in the future.

'I have exposure to the most cutting-edge AI and I think people should be really concerned about it,' Musk said in 2017.

'I keep sounding the alarm bell but until people see robots going down the street killing people, they don't know how to react because it seems so ethereal.'

While criticism around AI abounds, many experts caution that we are extremely far off from developing AI that's more powerful than the human brain, meaning the technology isn't a threat to humans as it exists currently.